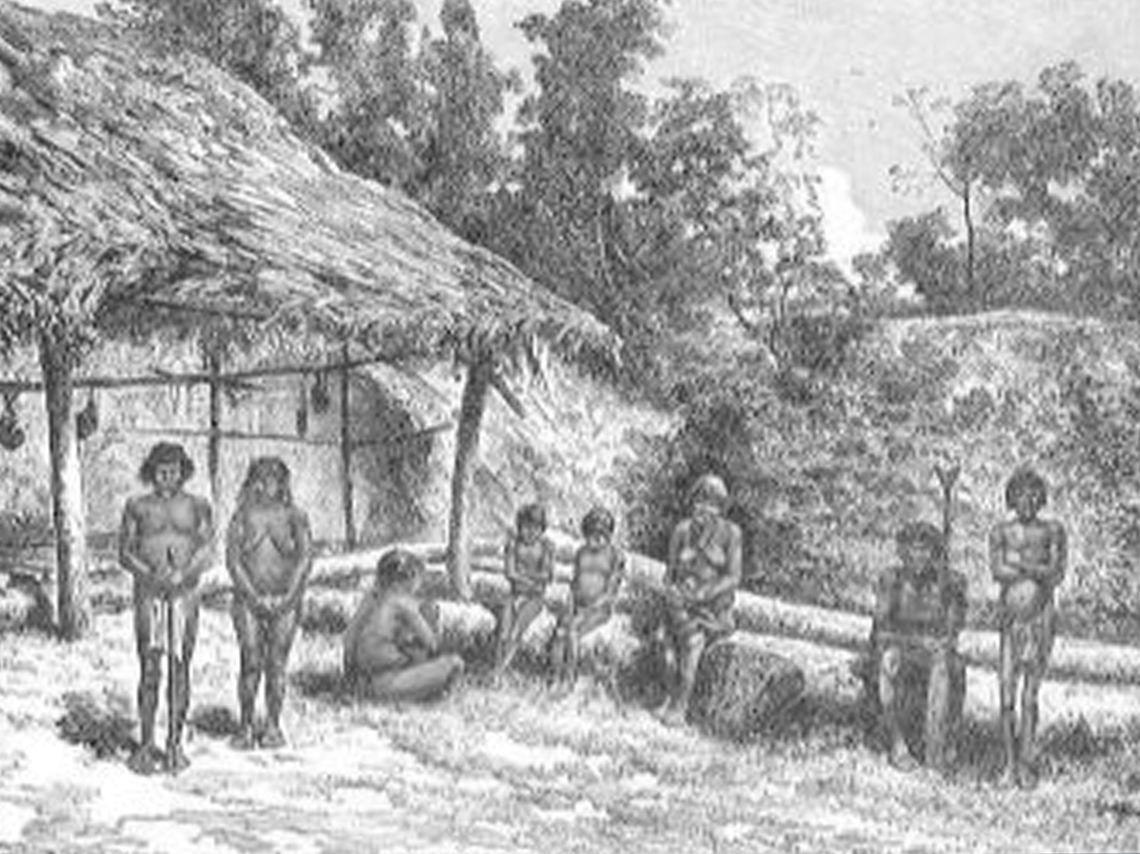 Columbus was the first to cross the Atlantic in 1492 with 3 sailing vessels , in search of a faster sea route to Indie. He discovered land after 3 weeks sailing , that he called West-Indie, assuming ( believing) that he had arrived in India.

The original inhabitants of America were therefore called INDIANS. Alonso de Ojeda discovered Aruba, Bonaire and Curacao in 1499, during an expedition to South America. The navigator of this expedition was Amerigo Malteo Vespucci, America is called after him.
Vespucci left a travelstory, through which we find out (rediscovered) the route. Ojeda and Vespucci lost sight of each other during the crossing to south America.
Vespucci ended up in Curacao via Trinidad,Venezuela and Bonaire. The discoverers saw big footprints on the island. They followed the tracks and finally met with five women, who had a robust posture. Vespucci called the island at first (originally) “the island of the giants”. Curacao is mentioned ( registered) like that on the first map of the west.

There are different theories how Curacao got her name. It is possible that the indian tribe was called “curacaoen”. Curacao means “heart” in Portuguese. This is also a known explanation. 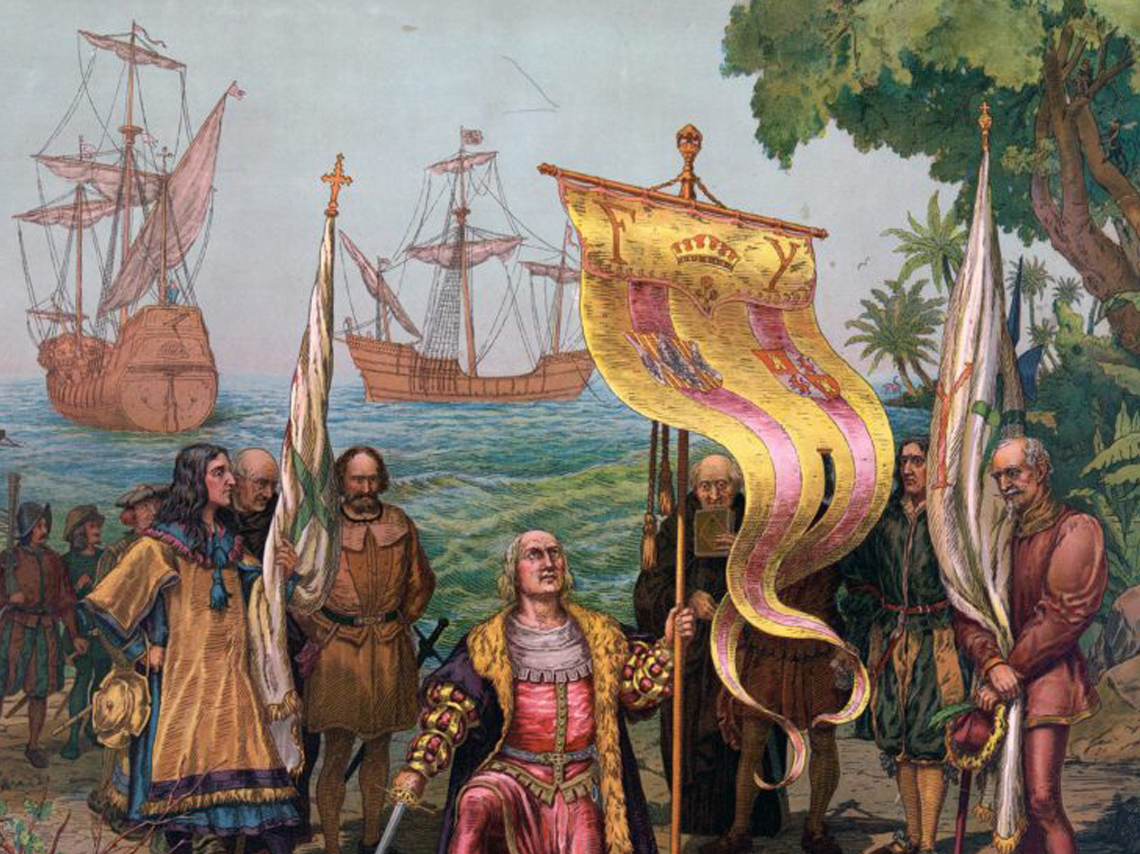 The Spanish settled down permanently in Curacao and built the first forts (tresses). The natural inlandbay “Annabaai” was an excellent harbour for the Spanish fleet. The ships could moor safely and were protected to attacks and tropical storms.
Alonso de Ojeda became governor of the Venezuelan coastal strip and also of the A-B-C- islands. ( Aruba,Bonaire and Curacao ). The Spanish called the islands “Islas Inutiles”(useless islands), because there were no natural resources found. The islands were also too dry for agriculture and cattle-breeding on a large scale.
They took away the about 2000 indians of the islands to Santo Domingo to work as slaves in the coppermines. The spaniards were in control of Curacao for more than a century from 1499 till 1634. 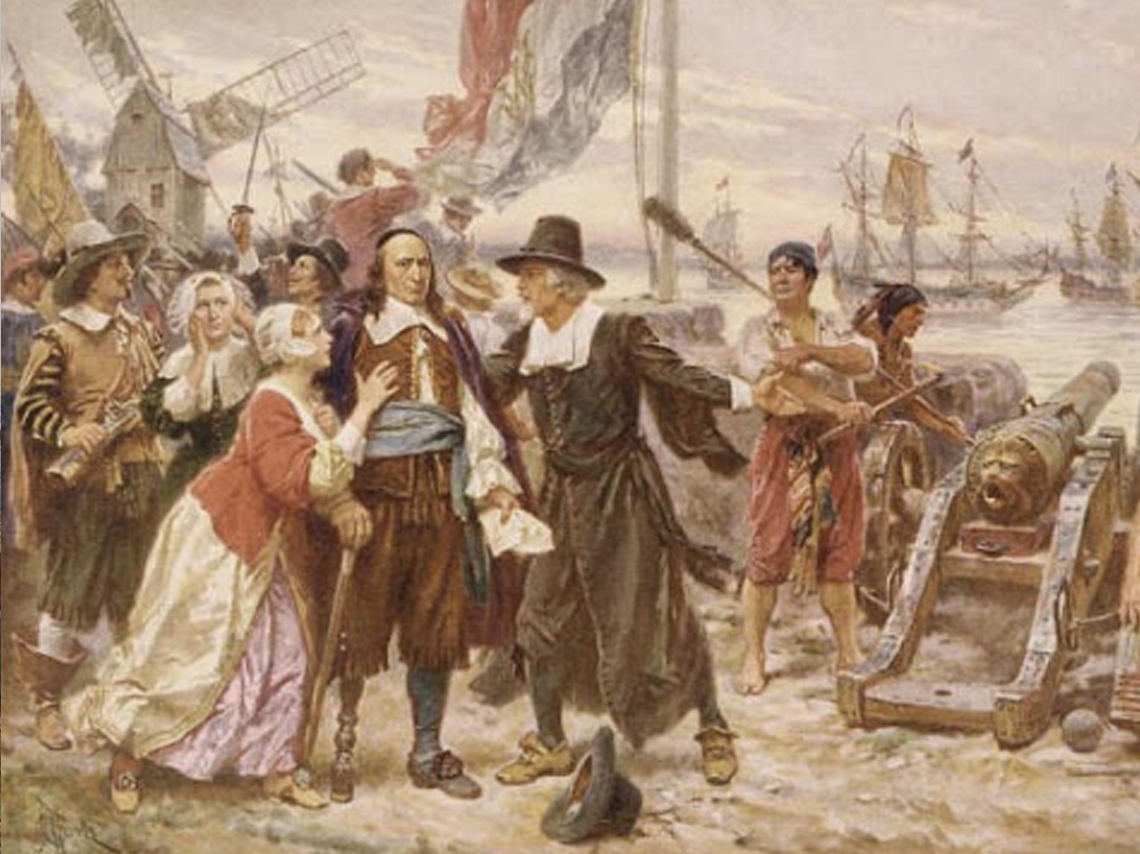 Under the command of Johan van Walbeeck the dutch claimed the island Curacao in 1634. Peter Stuyvesant became governor in 1642. The Curacao landscape was divided in plantations under his government. The many land houses on the island date back from this period. Sometimes you still see old stone walls as borders of the former estates. On the estates they cultivated different crops, fruits and cattle. Peanuts, corn and dried fruits were as well as salt the most important export products.

Curacao developed (itself) as an important trade - center for the region by its natural harbour and strategic situation. It became an important center for the slave – trade. Captive Africans were shipped to Curacao and sold as slaves throughout the whole Caribbean region. 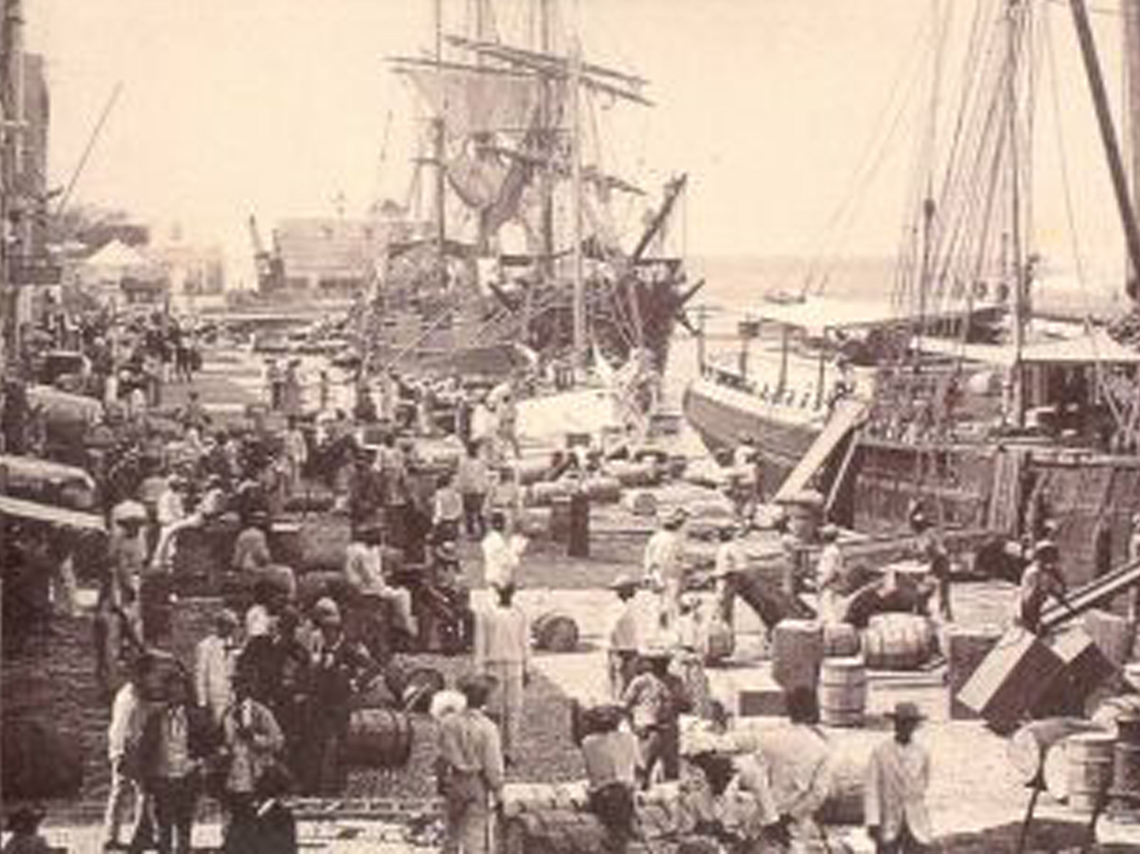 Picture of the Harbor at Annabay where you can see the activity loading and unloading ships. The photo was taken at the end of the 19th age. Curacao was an important trade center by then. 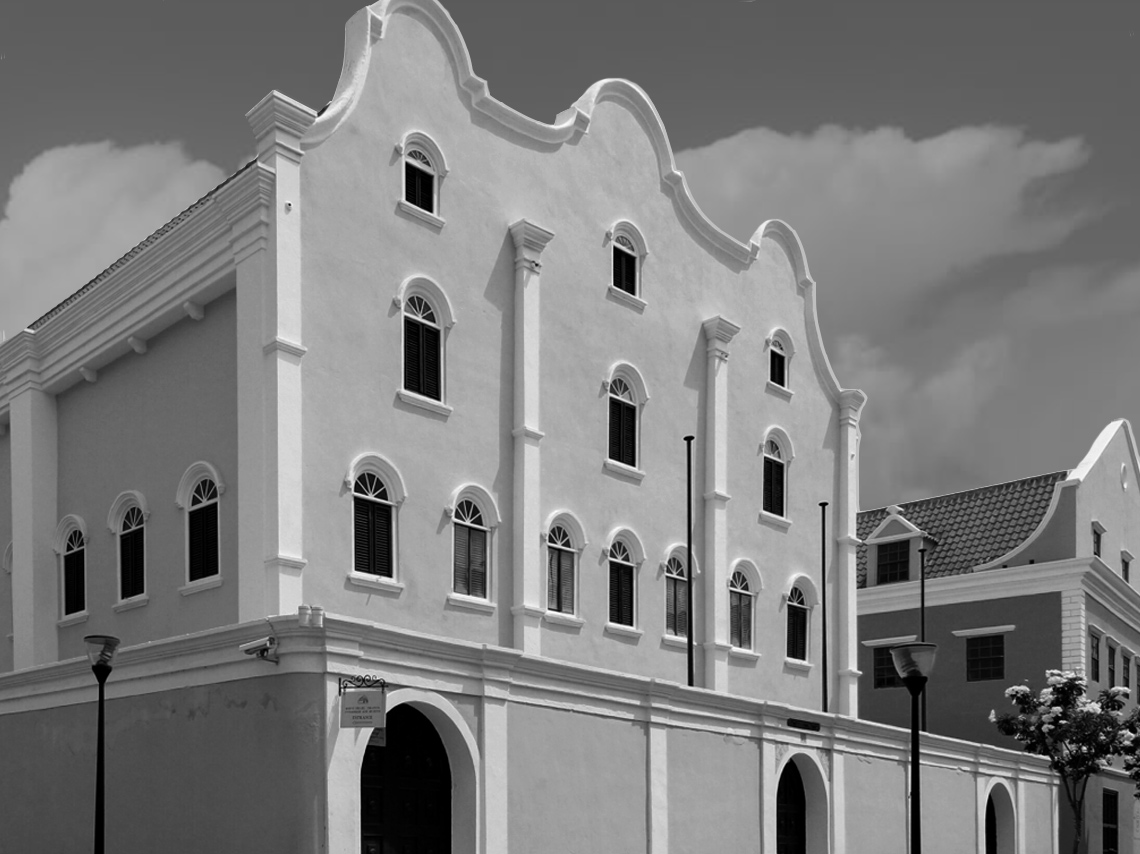 Lots of Portuguese jewish people came to Curacao in 1654, when the dutch lost the power over Brazil. They were Sephardic Jews. There also came a lot of jewish people from Europe. They engaged in agriculture at first, but later on in trade in the Caribbean region, especially with the Spanish colony Venezuela. At the end of the 18 th century the Jewish community had reached a total of more than 2000 people.They contributed a lot to the development of the island as a trade-center.

They built shops, warehouses and mansions in Punda and Scharloo. They established (founded) the Maikve Israel Emanuel Synagogue in Willemstad, a structure, that still stands today. It is one of the eldest synagogues of the western hemisphere. 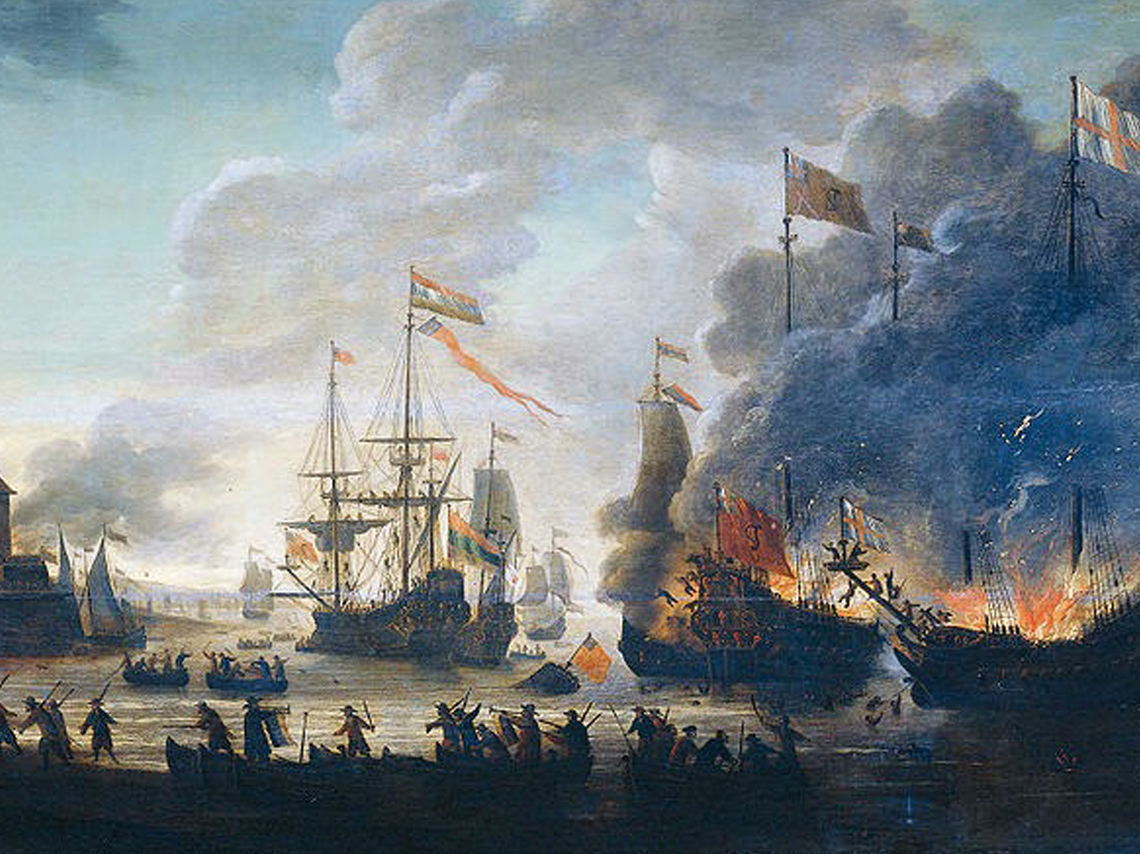 During the 18 th century the British, Dutch and French fought for the different islands in the Caribean territory. They changed flags from time to time. Between 1800 and 1815 Curacao was conquered by the British several times.

The Dutch got the island back into their power in 1815, after signing the “TREATY OF PARIS”. The island was a dutch colony from that period on, and up to now you can find the dutch influence everywhere in Curacao. 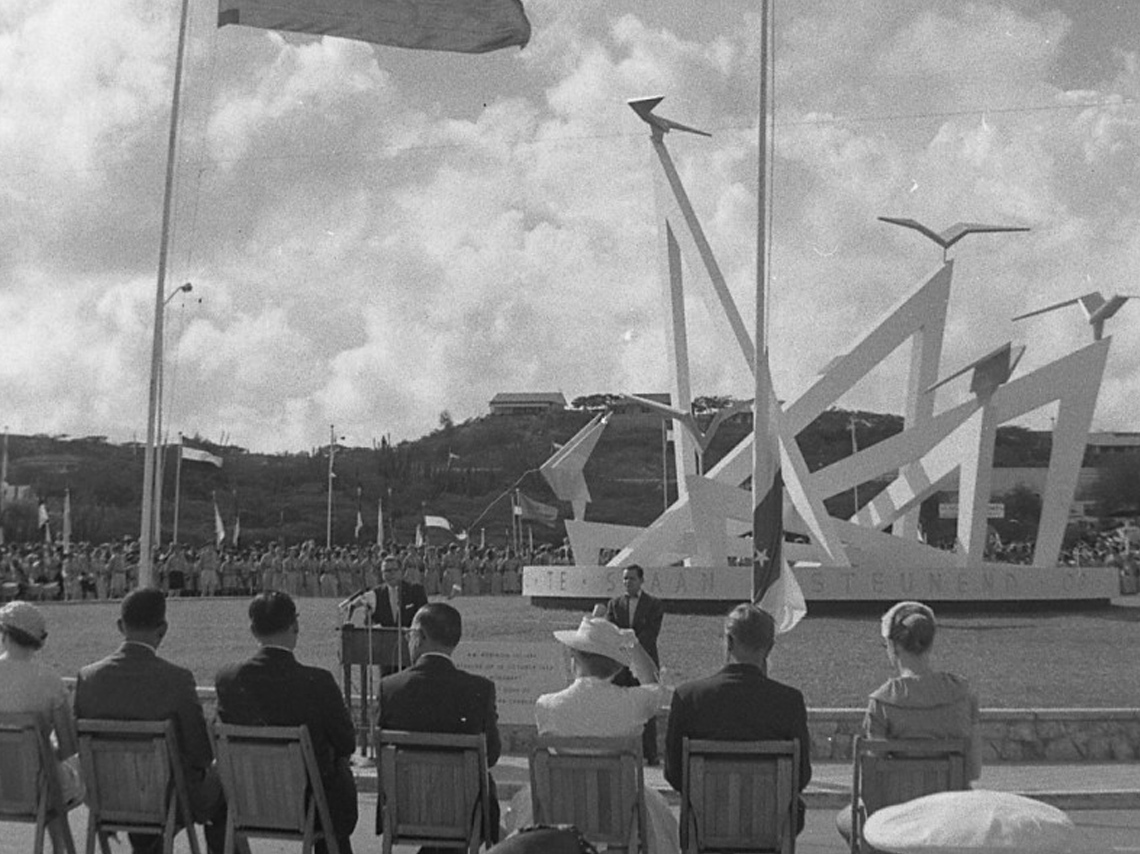 They found large amounts of oil in Venezuela in the beginning of the 20 th century. The Shell built a big oil-refinery in Curacao. This had enormous influences on the Curacao economy. Soon Shell became the biggest employer and took care of a modern infrastructure.Many families immigrated from the surrounding lands and islands to Curacao to work for Shell. Curacao was of very strategic importance as an oil producer during the second world-war.

During the fifty’s there was a great wish for autonomy in Curacao and the other colonies of that time. Curacao got, together with the other islands, her own place in the Dutch Kingdom.
In 1954 the Netherlands Antilles were established, consisting of Aruba, Bonaire, St. Maarten, Saba and St. Eustatius. There was a central government that was stipulated in a statute. The islands all got their own government as well. Aruba is on her own now and reports directly to the dutch government.
The Dutch Kingdom exists nowadays of 3 separate parts , The Netherlands, the five islands of the Netherlands Antilles and Aruba. The formal head of state is Queen Beatrix.

The islands became famous as touristic destinations in the sixties.
Lots of tourists from the U.S. visited the islands, and big hotels were developed. After a decline of the amount of tourists in the eighties and nineties there is a revival, the amount of visiting tourists is rising.